The Gaussian Probability Distribution is the familiar 'bell' shaped curve shown in Figure 2 below. In the words of Professor Clifford Swartz, 'In a surprising number of cases, experimental data can be fitted to ... the Gaussian equation.' (see Used Math page 86, Prentice-Hall, Inc., 1973). This reality explains wide spread use of the Gaussian in sociology, education, biology and industry.

The Gaussian PDF is usually shown as a graph where:

For the Gaussian Distribution, the random variable (x axis) is continuous, thus the PDF graph appears as a smooth curve. The graph form of the PDF is simply a plot of the Gaussian equation shown below. 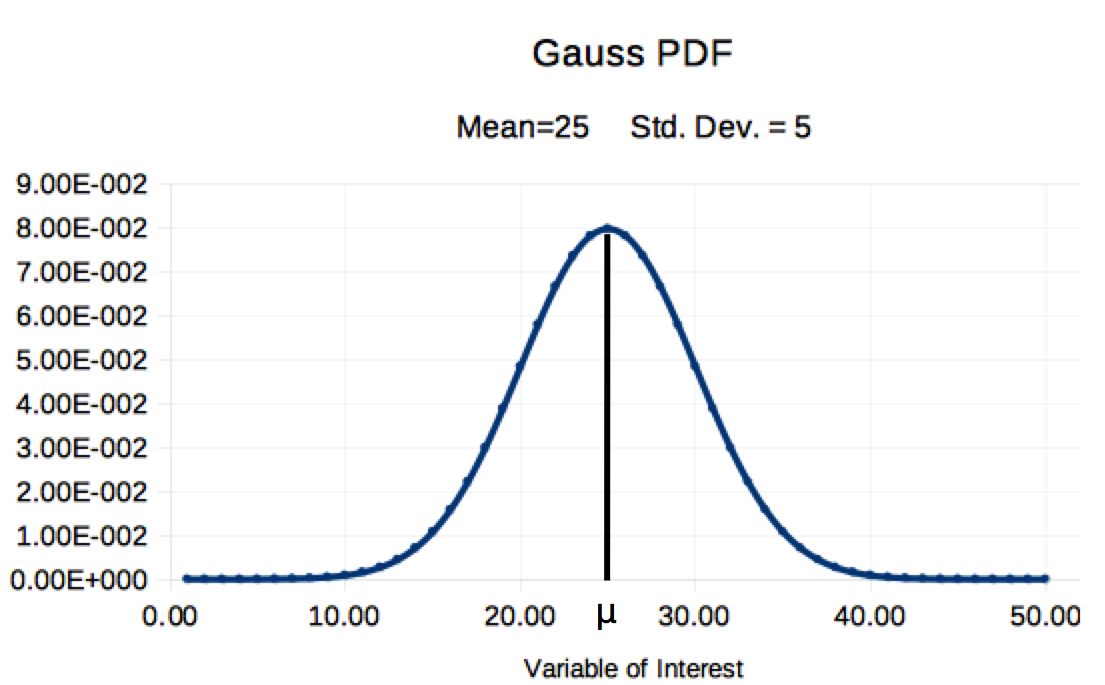 Characteristics of the Gaussian Distribution:

Study Ch 4 Figure 2 above and compare its features to the Gaussian PDF characteristics listed below:

How do we know if the Guassian Distribution fits the data? The most frequently used method is to plot the data and see if it looks Gaussian. When many data points are available, the data is put into 'bands or ranges' of values and the midpoint of each band is paired to its count in a spreadsheet. A graph is produced and if it has a 'bell' shaped appearance, the use of the Gaussian is justified. A notional example of banded data and graph for 154 tested bolts is shown below: 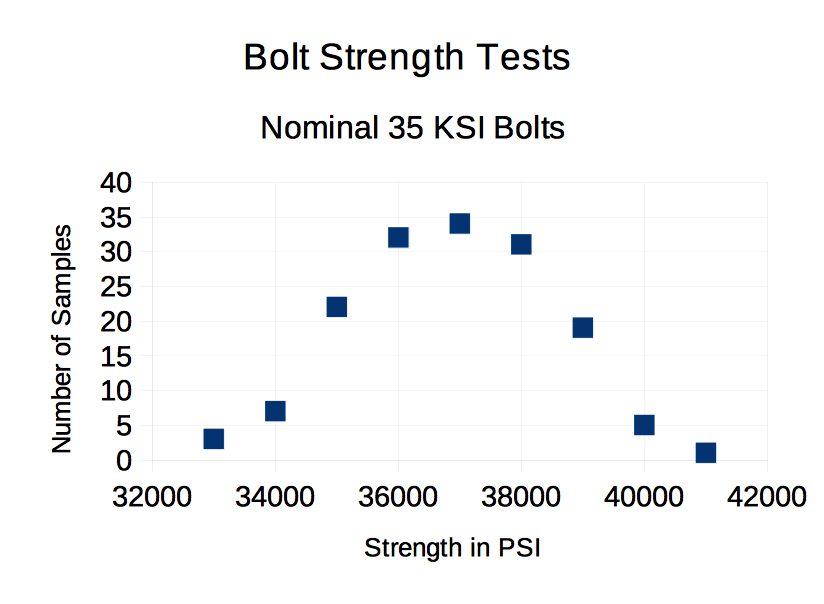 For the sample of 154 bolts, the data looks Gaussian and this is typical of production from an assembly line. Depending on the application, this visual confirmation may be sufficient justification for using the Gaussian Distribution. There are mathematical ways of justifying use; but, the 'eyeball test' may be the best. From Professor Swartz, 'It is a rare problem in correlation, when better judgement can be drawn from knowledge of r^2 (coefficient of correlation) than can be obtained by examining a scatter diagram of the data (see Used Math). ' In conclusion, a visual confirmation of data to the expected 'bell' shaped curve is usually sufficient basis for using the Gaussian Distribution.

The Mean and the Standard Deviation:


There are two different sources for this data:

In Chapter 3, specific problem solution using the Binomial Distribution was achieved by picking the correct term from the Binomial Equation and solving it. Unfortunately, the Gaussian PDF does not provide such easy methods because:

Thus, the area under the curve can provide answers; but, previously studied methods for finding that area do not work.

A method for solving Gaussian problems has, however, been developed based on the following:

A method has been summarized for solving problems involving Gaussian distributions. But the table in Ch4 Figure 4 should have more rows, and a small picture to remind the reader of its relationship to the PDF. Figure 5 below addresses these issues.

The picture and 'Z Table' are based on the Standard Normal PDF (Gaussian with μ=0 σ=1 and Area = 100%). The table below descibes the blue area (which is percent) between the mean and some value of z.

The 'blue area' of Figure 5 represents the probability of production levels between the mean and up to a specific value of Z (the right corner of blue).

Example 1a: The Hay Problem
Average western Oregon hay production is 112 bales per acre with a standard deviation of 26 bales per acre. What is the probability of producing between 112 bales/acre and 125 bales/acre?


Example 1b: More Hay Questions
The average hay production is still 112 bales/acre with a standard deviation of 26 bales per acre. What is the probability of producing less than 125 bales per acre?

Example 1c: Hay Problem with Different Question:
The μ and σ are the same as before. What is the probability of producing more than 150 bales per acre?

Cow Milk Production:
Internet research indicates that Ayrshire cow herds produce an average of 55 pounds of milk each day with a standard deviation of 7.1 pounds/day (times number of cows). Assume a Gaussian distribution applies and answer the following questions: 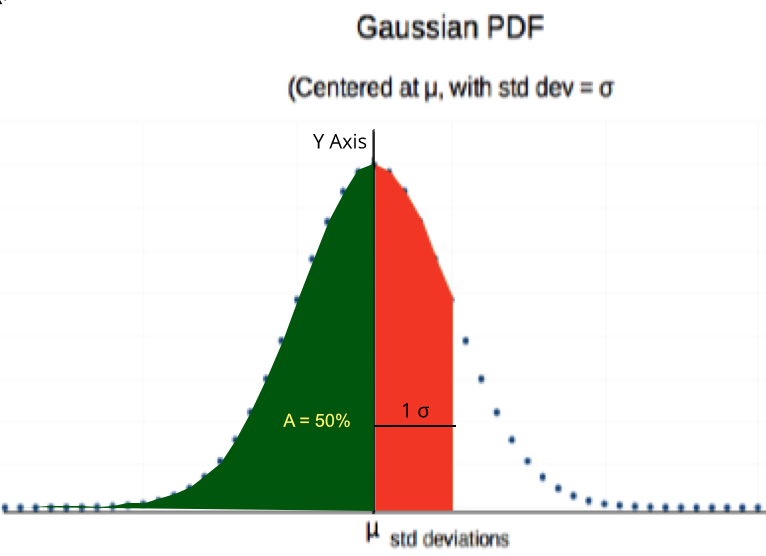 Example 2b: What percent of cow herds will produce 62.1 lbs/day or less?

When solving a problem in the real world, it is important to understand what μ and σ really mean (i.e. how were they developed?). We need to clearly understand whether μ refers to the the variation between individual cows, or the variation between herds. I must confess that while I was typing up this web page, I had go back to the Internet and verify that those were 'herd' based statistics. This type of cow is present in New Zealand, Scottland and many other countries. I speculate that the conditions vary greatly and so may statistics (μ and σ) from different countries. In conclusion, the analyst should try to ensure that the basis for his statistics (μ and σ) are similar to the problem he is asked to analyze.

Homework Problems:
Work the problems assigned by your instructor. Ε-mail your work or hand it in for evaluation. For Internet Students without instructors, work the even numbered problems. Odd numbered problems may be worked for added practice, or used as examples in class.

2. Lilliput Father worries about Daughter's Marriage: In Lilliput, worker wages follow a Gaussian distribution with μ= 21 pesos/week and σ = 3 pesos/week.
a. If Juan earns 21 pesos/week, what percentage of Lilliputions are worse off than Juan?
b. Juan's daughter meets a young man named Ethen and they want to get married. But Juan is worried about Ethen's ability to support a family. Ethen tells the father that he earns 26 pesos per week.
3. Auto Fuel Efficiency Regulations: The 'Environmental Agency' in Lilliput requires all new cars be tested and certified to 30 miles/gallon (or better) fuel efficiency. Assume that production line fuel efficiencies follow a Gaussian distribution.
The newly designed 'X-Car' has a mean fuel eficiency of 40 mpg with a standard deviation of 3 mpg.
a. What percentage of X-Cars will fail their milage test?
b. Out of 1000 cars, about how many cars would you expect to fail?

4. New Car Repairs: Assume auto frequency of repairs follows a Gaussian distribution., Dealer repair records indicate the frequency of new car repairs has a μ = 24 months with σ = 6 months. What percentage of new cars sold will require repairs before one year of use?

5. Automobile Belt Replacement: Lilliput's 'Brand X' automobiles have timing belts with an average life of 110 thousand miles and a standard deviation of 10 thousand miles. What "mainenance milage" should the auto maker recommend to ensure less than .8% (i.e. 008 of cars) breakdown (99.2 don't) on the higway with this expensive type of failure?

8. Leprosy Sickness Development: the disease Leprosy has a mean development time of 10 years after infection with a standard deviation of 5 years. Assume 100% of exposed people will eventually catch the disease. If all tribe members on the island are exposed from birth, what percentage of the population will have no symptoms at age 12?

9. Which Bolt Manufacturing Method is Best? A factory manager has two alternative manufacturing processes for making 36 ksi (36000 pounds per square inch) foundation bolts. Bolt strength follows a Gaussian distribution. Process 'A; results in a lower average strength, but bolts from this process have little variation in strength (small σ). Process 'B' on average makes a stronger bolts, but the bolts have a lot of variation (large σ). The factory manager wants to know which process will produce the fewest number of 'rejects' (i.e. a bolt with strength less than 36 ksi).

See Chapter 4 Figure 7 above, for PDF illustrations of the two processes. You do not need to do math. Just look at the two graphs and figure out the answer. Explain your answer based on the colored areas of the two graphs.

10. Robin Hood: Robin Hood was a famous English archer at the dawn of English history. It is said he could shoot 4 arrows into a 4 inch circle at 200 feet.

Modern Archers Shooting Accuracy: If a modern archer has a target error mean (μ) of 6" at 200 feet and a standard deviation (σ) of 2 inches with a Gaussian distribution, then: 11. Cannon Shell Accuracy: During the Russian-Japanese War in 1904, the Japanese fired high angle cannons at Russian ships anchored in the harbor. Russian ships were 65 feet wide. 30% of the shells hit their targets.

Assume: Fall of shells follows a Gaussian Distribution
Assume: Japanese shell fire was centered on Russian ships
a. What was the standard deviation σ of the Japanese cannon fire?
b. What percentage of Japanese shells would have landed within 5 feet of the ships, but not actually hitting them?

The 'Z Table' and PDF of Chapter 4 Figure 5 match one another. But not all 'Z Tables' look like that. During homework solution, you often ended up adding the area from the 'Z-Table' to 50% (left white tail) to get your final answer. Did you ever wish for a 'Z-Table' that had a picture and table to match the one below? Some 'Z-Tables' are built that way.

Figure 8 above is different. The PDF shaded area once again extends some distance z to right of mean; but, it extends all the way to the far left of the PDF (which goes to infinity by the way). If that is true, the Figure 8 Table should show 50% added onto the 34% for z=1. Looking at Table 8 above, the value shown really is 84%. This is the table that you often wished for during your homework!

Another Kind of 'Z-Table' (Symmetric Shaded Area Around Mean):


There are many situations (especially in the Engineering world) where the combined area equi-distant both -z and +z from the mean is desired. Table 9 above may be used in such circumstance (i.e. in lieu of using Figure 5 and doubling the area to account for that equal portion left of μ). Three examples of where this kind of table is preferred follow:

Example 1: The length of a bolt or screw is critical in aircraft engineering applications where control of weight is critical to design success. The monitoring of production requires overall length control. Thus, statistics of analysis must consider length that falls excessivley either to the left or right of the design mid-point. Figure 9 Z-Table above can be used in such situations.

Example 3: Multiple methods exist for analyzing the life of electronic products in a vibration environment. One of the more common methods is to perform a Steinberg analysis (see TBD by David S. Steinberg) which relys on characterizing vibration using a double sided PDF as described by Figure 9 above.

Many Kinds of 'Z-Table': There are many kinds of 'Z-Table' depending on the PDF area that is tabulated against the 'z' value. This is one of several reasons why 'Z-Tables' are generally accompanied by a PDF graph with shaded area. In general, any of them can work for an aware analyst, but students are advised to look critically at the accompanying PDF graph before proceeding with analysis.

I hope this brief introduction to solving problems involving the Gaussian Distribution is helpful. Get lots of practice, because Gaussian applications are common in the 'real world'.

When I was doing Internet research in support of homework problems, I had trouble finding information that included both μ and σ. When I did get this information, the basis of its development was often unclear. I was left wondering whether Internet articles are intended for a nontechnical audience, or whether the researchers themselves lacked deep insight into the information they should convey.

I am reminded of a doctor in Cuba who identified the mosquito as carrier of Malaria in the 1870s. He correctly identified the exact type of mosquito; but, he was many years out of college and his scientific presentation was insufficient. Thousands died during Panama Canal construction because of his insufficient technical presentation.

I am hopeful, that this course will give you the technical insight that you need -- the tools that long dead Spanish doctor lacked.