Building a Z-Table by Computerised Trapezoidal Summation (Rev A)

Introduction: From St. Pauls Statistics Introduction we know that the probability of an event falling between z = a and z = b is equal to the area under the PDF curve between those same two values. St. Paul also indicated that Calculus can not determine the area for a region of the Gaussian Distribution (it does work well for many other distributions).

Given our math inability to determine area, we are forced to use computer approximations and document them in a table, commonly called a 'Z-Table'. The 'Z-Table' is married to an idealised Gaussian Distribution centered around the mean (μ=0) with a standard deviation of 1 (σ = 1). Of course, the total area under the curve is 100% (i.e. N=1) because all Probability Density Graphs (PDF) are built that way.

How can we do a computer analysis of area? We can start with the general Gaussian PDF equation and assign μ=0, σ=1 Ν=1. Then we simplify the equation. The result is Figure 1 below. Figure 1 is the equation of the idealised Gaussian Distribution. It is the key to computing Z-Table values:


An explanation of how to find values of area, corresponding to different z values follows. The method is not difficult and can be accomplished by a computer using a spreadsheet.

Overview of Trapezoid Area Method: The trapezoidal area approximation is explained in any beginning Calculus book; but, it is simple enough for an algebra student. It works well for computer analysis.

If we want the area under a curve between two points (points a & f, both on the x axis), the area is divided into vertical strips of uniform width w. We then calculate the height of each strip & multiply by w to get the area for that strip. Finally, we add up all the strips for the region of interest. When using this method, I usually define the left an right boundaries of the region as x=a, x=f (a and f are numbers) as shown in Figure 2. Detailed steps follow:

For the example shown, only 50 slices were used yet the resulting Z-Table is quite accurate. The enterprising student is welcome to increase the number of slices to 500. I would expect such a spreadsheet would produce results accurate to 4 or 5 decimal places (i.e. would match published tables exactly). 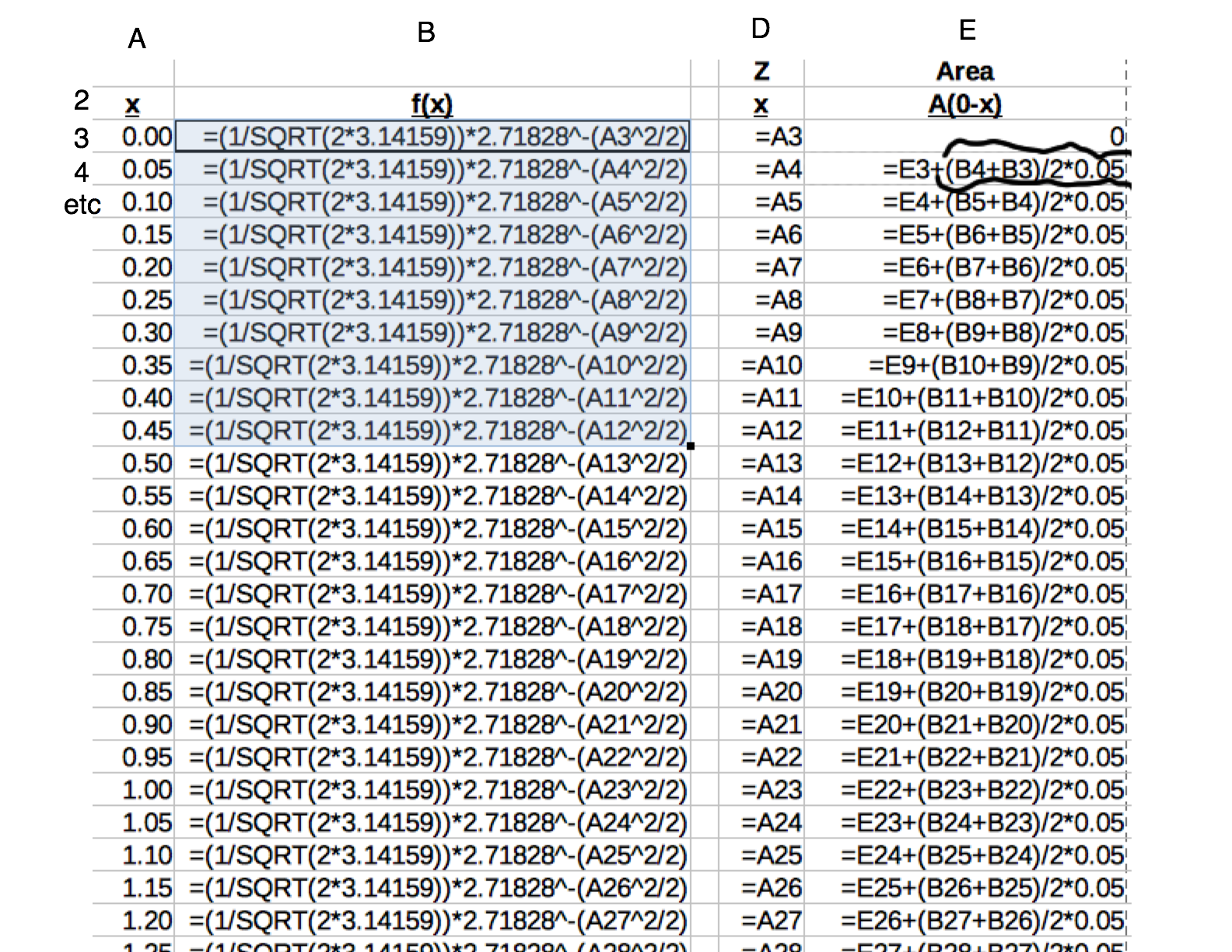 Spreadsheet 'Z-Table' resulting from coarse Trapezoid Slices
Figure 4
The material above has presented the results of a course computer model using the trapezoidal integration rule. While the model is simple, accuracy to three decimal places has been achieved. The student is encouraged to compare a few 'key locations' (such as z=1) between the model results in Figure 4 and the accepted results extracted from published statistical material shown in Figure 5 below.

Textbook Values of Z-Table
Figure 5
Figure 5 above is an actual Z-Table with Graphic PDF extracted from a statistics book. The student should note small errors made in the 'trapezoidal model' that resulted from the rather course number of slices.