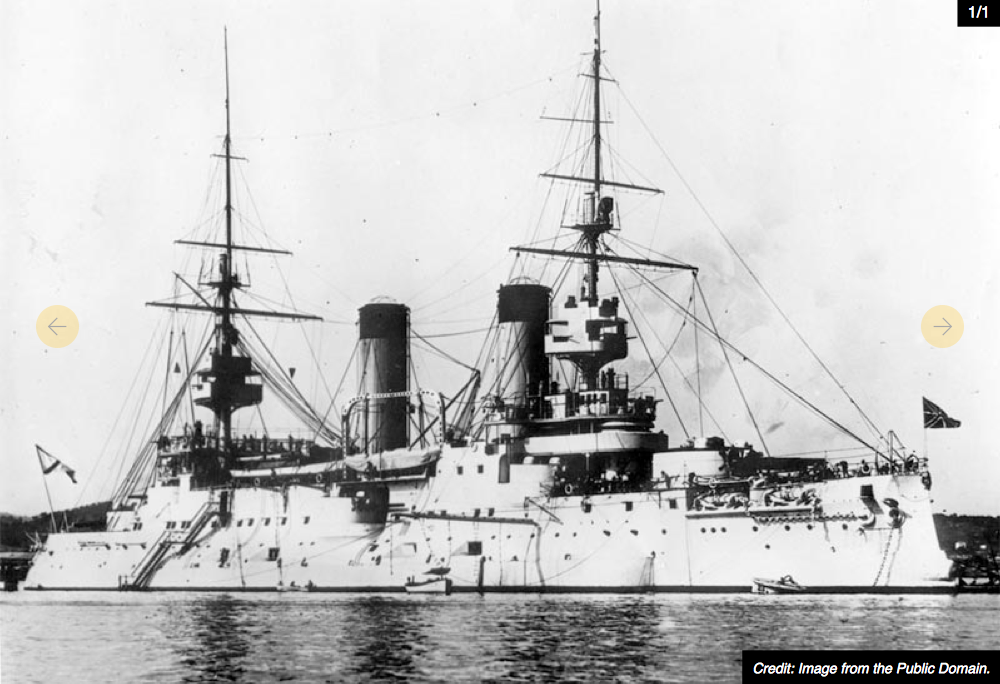 This paper discusses the third element, i.e. the use of anti-torpedo bulkheads to restrict flooding within the hull.

Early experimentation with torpedoes demonstrated the infeasibility of armour as a defence against torpedoes. It was infeasible because the required thickness of armour proved excessively heavy. The alternative was to build longitudinal bulkheads several feet inboard of the hull to prevent unbounded flooding. Typically, the region between bulkhead and hull was divided into 18 foot sections by transverse bulkheads, thus restricting longitudinal as well as cross beam flooding.

By 1900, French influence pre-dreadnought designs (e.g. Tsarevitch, Borodino et. al.) were equipped with such longitudinal bulkheads. it seems British use of such systems was introduced circa 1905 with HMS Dreadnought.

Effectiveness/Resistance Value:
The figure of merit for an anti-torpedo defence system is the pounds of TNT the system can withstand without breach of the inner bulkhead. we shall call this the "resistance" of the system. By definition, "success" of the bulkhead system occurs when flooding from a torpedo explosion is restricted to a small region between hull and the inner longitudinal bulkhead. When struck, even the "successful system" will allow flooding; but, it will be restricted to a region within a few feet of the hull. For example, a defence system 10 feet deep, extending down 25 feet from the waterline and divided every 18 feet along it length can be expected to flood that volume after one hit. Math indicates 10x20x18 cubic feet. dividing by 27 indicates 133 cubic yards of water which is also 133 tons of seawater.

In general, as the distance from the hull to longitudinal bulkhead increases (depth in feet), the system could withstand greater explosive charge (i.e. greater resistance). While depth is the single most important determiner of system resistance, other techniques to improve system resistance were discovered:

Testing methods employed also had profound effect on resistance data reaching today's historian. Contracts often required the hull to withstand "so many" pounds of TNT exploded next to the underwater hull. Period experiments were often performed to demonstrate compliance to this requirement. Once the system provided compliant, the contractor had little motivation to repeat the experiment with progressively larger charges to determine the limit of system resistance. Available data thus tends to be "lower bound" system resistance rather than actual system capability.

Figure 1 provides data points for actual ships. Depth in feet is graphed against resistance. A normative description of resistance correlated to depth (and ignoring all other factors) is given by: Eq 1: resistance lbs of tnt = 37.56*depth in feet - 132 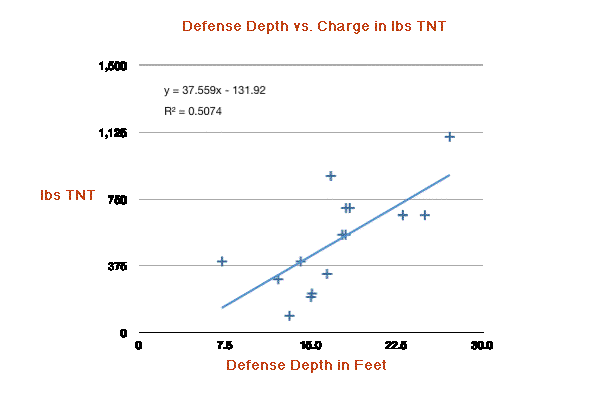 System weight:
A defence system must be evaluated in terms of its weight, volume and cost because every system completes in a Darwinian fashion for these resources. The historian pursues such understanding; however, data available to him his heavily influenced by the contracting environment that birthed period data. For British ships, very little data is available for the weight or cost of anti-torpedo defence systems included as original design. This information is only available for instance of "ship modification". I infer that during original build, British contractors treated most of the anti-torpedo system as hull, with only weight of armoured screens tabulated separately. During modernisation projects (e.g. bulging), engineering considerations necessitated discrete weight itemisation and thus become visible.

The weight of anti-torpedo defence systems is influenced by its depth, length and construction methodology. While accurate models of weight based on these parameters is made difficult by data scatter, the following general conclusions are possible. 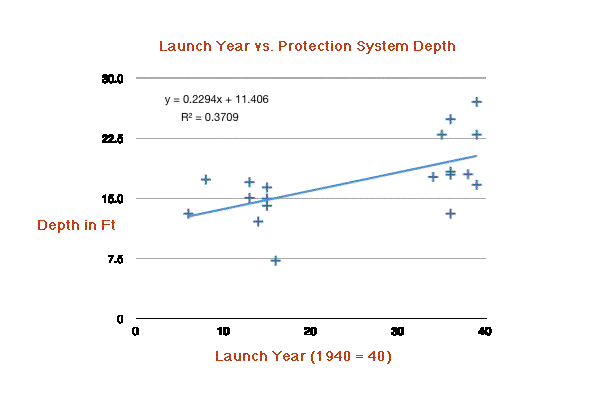 It is difficult to look at equation 2 and understand its implications. I have therefore developed Figures 3 and 4 to illustrate the trends implicit in equation 2.

If a 30k ton vessel were designed & launched in successive years, Figure 3 shows how the weight of the defence system would grow over time as indicated from eq 2. 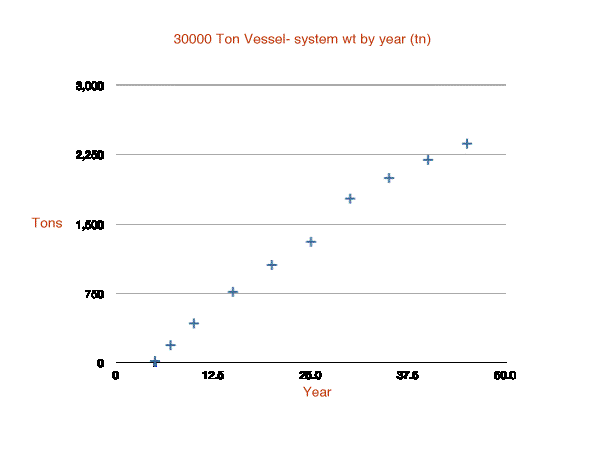 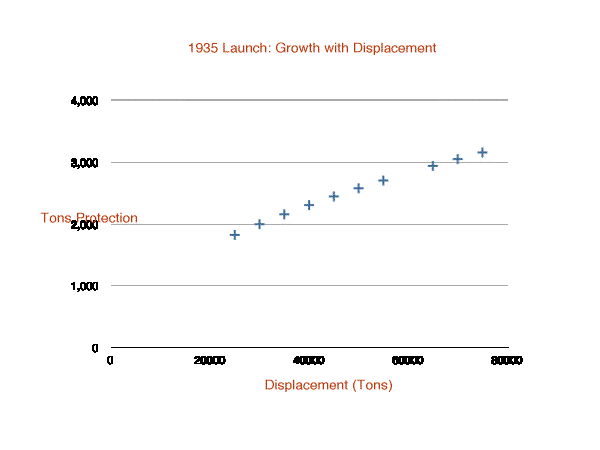 Validation:
Equation 2 provide a means of predicting the the expected weight of anti-torpedo protective systems for battleships launched between 1905 and 1940. predicted vs. historical values are compared in table 2 below. For the three examples tested, Eq 2 proves accurate. The reader is cautioned that Eq 2 is a normative predictor meaning that it predicts typical values. The highly efficient French Dunkerque will be over predicted by large margin. Modernized & bulged battleships will be greatly under predicted.


Equations 1 and 2 (combined with other equations presented in the conclusion below) enable a prediction of the "resistance" capability of the same three historical ships. Table 3 below indicates the reasonableness of such predictions, which are once again predictions of typical defence systems.

Conclusion:
Little historical data exists describing anti-torpedo defence systems employed between 1905 and 1940. Prior to that time, such systems were usually not designed into ships. Based on the scarce existent data, it is difficult to identify clear trends because of data scatter (see Figure 2 for Example). The ad hoc predictive models developed herein sometimes use equations based on well defined but limited data in lieu of historical curve fits presented in the figures above. While disquieting, the ad hoc models do; however, produce realistic results for most ships.

Weight in Tons for ship of Displacement D and Launched in Year (note 1933=33)
Note: Eq 2 is not to be used prior to 1905. Prior to that time, assume no defence system.