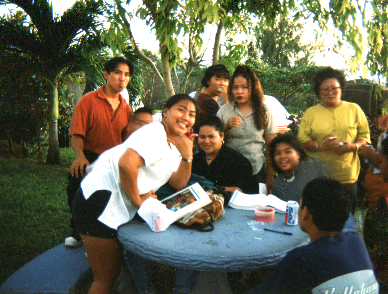 Arrival on Rota:
I washed up on the shores of Rota in the spring of 1996. I had arranged a teaching contract with Northern Marianas College and two weeks later, I had 14 college age math students.

Ten Minute Lectures:
After two lectures, I knew my students were different from those on the mainland. A friend of mine once explained "Island boys don't do things island boys don't want to." Listening more than ten minutes clearly wasn't on their 'want to' list.

That evening, I retired to Figueroas for pizza and a few glasses of wine as I mulled over my new discovery. Either I had to develop a new teaching paradigm, or spend two fruitless years on the island. A few glasses of wine brought great clarity. The students were right. Long lectures taught me little during my college years. It was the time I spent working through problems that really helped. Interestingly, it was the problems I worked wrong and kept wrestling with that taught me the most. Sitting in Figueroas, I accepted these realities and worked out a new approach.

The following day, I marched confidently into class. After role call, I announced "You will all listen closely to my lecture today, because it will last only 10 minutes. Maybe you don't believe me? Ivan, if I am still going at 12 minutes you stand up and I'll stop. Deal?" I looked around the room until I had broad agreement before launching into a compact lecture covering only the essentials. "Now, open your books, look at your syllabus and get started with the problems...."

"What if I finish early?" asked one.

"I'll glance over your work. If its right, you can either hang around and help the others or leave."

The students buckled down, working hard against the clock. The fast ones stayed to help others because islanders live in a supportive society. Out of pure luck, I had scored big. I had achieved the following:

Student Honesty:
After grading the first test, I knew something was wrong. A problem missed was missed by all. Evidently, Rota students were experts at cheating. In response, teachers usually 'get tough'; but, this clearly hadn't worked in the past. Once again, I retired to Figueroas for contemplation. I was certain of one thing. My rapport with students was good, and I didn't want that to change.

I returned the tests, marked fairly and said nothing at all about the cheating. I taught class as before and passed out a study sheet before the next test. On test day, five different tests, were distributed to my 14 students. The tests looked similar but with subtle changes like an exponent changed here and a sign there. There were five corresponding answer keys.

Near the end of class, Ivan handed in his paper and quipped "You're a very smart teacher Mr. Watson." I shooed him off before he could reveal my secret. In the days ahead, it became clear that the students admired my response. I learned that these students were honour bound to compete with the teacher in this way. They also believed that a great teacher would rise to the challenge without getting flustered or making enemies. I had survived my second challenge.

Putting Time Where It Matters:
I came to Rota believing that homework ought to be graded - every last problem. I also believed a contract was a contract and I was a teacher. In time, I learned Island views were different. On odd Fridays, the math teacher, along with everyone else, was expected to plant trees. But neither administrator nor students saw great value in my grading homework. For my students, feedback was in class and immediate. Somehow, everyone on Rota understood that the doing of homework helped; but grading it only made the teacher irritable.

My office hours were whenever a student needed me. I taught at the college and I taught eating pizza. My students learned a lot of math, but most importantly they learned confidence in themselves.

Mr. Mundo, our administrator was a wonderful man who cared much about learning and little about teaching. He had in instinctive grasp of what was working and he never interfered with effective techniques. The support of this wonderful man enabled my development of an effective program on this remote Pacific island.

The Social Society:
During my second semester, I noticed two students working together across the aisle. "Distracting," I thought. I asked them to move their desks close so as not to disturb, but cautioned them to concentrate on math. The entire class was soon working in small groups, with the strong helping the weak. With small class sizes, this social mode of study proved very effective, often engaging students unreached by other methods.

Trust and Confidence:
After a couple of semesters, my students grew confident and my life became much easier. My detractors were roundly put down with words like, "If you can't learn from Mr. Watson, there's no hope for you! Go back and try harder." The few who received this message came back and buckled down. Most were successful.

I have always felt that confidence is essential to good performance. A few semesters of a "learner centric" program helped a great deal. During my third year, a colleague from Saipan visited my office. Rosanna and another student were there when he dropped in. I gave my two students the algebra final review sheet and handed one to the visiting professor.

He quickly glanced down the sheet and looked hard at Rosanna. "Can you do all this?", he asked.

Without blinking an eye she answered. "Yes Sir I can, because if I don't Mr. Watson will fail me."

I was proud Rosanna for her "can do" attitude and it was not bravado. It was granite stable confidence that she had developed during three semesters in my classes.

The visitor commented, "My students in Saipan would be severely challenged by this." I have always remembered the kindness of that man. And I will always remember Rosanna M and the many students like her.

Conclusion :
On Rota, the teaching methods I brought to the island were constantly challenged. Usually these challenges came as 'unexpected/undesirable' student behaviour (e.g. discussions across the neat orderly isles when doing math). Each time, my emotion reacted to perceived challenges of my authority; but, my mind restrained these knee jerk instincts. After controlling my impulses, I quickly assessed whether some alternative way of managing the classroom might result in a better learning environment. I made many snap decisions and the results were almost always helpful. While there are times a teacher must take a hard stand, success on Rota required a great willingness to move away from traditional, mainland teaching methods. I taught well, but it was not good teaching that made the difference. It was changes in the learning environment that resulted in a highly successful learning program.

My Rota classrooms can be characterised by following: