We do not accept advertising dollars. We just give you the straight scoop on good books! 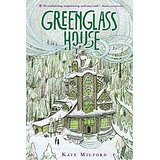 Fast moving mystery in an "old house" during a snow covered Christmas.

Milo is looking forward to a quiet Christmas with his family in their ramshackle house hotel, when six strange guests arrive. Arguments soon erupt between the guests as an odd assortment of things goes missing from their rooms. Milo is soon involved with Mendy in trying to find the missing objects and unravelling why this odd assortment of guests arrived.

Brilliant, but perhaps beyond the maturity of the intended reader.

Teenage Evan morns the death of his father as X-Marine grandfather Griff shows up to "help with the estate." The boy starts reading a very limited edition book that his father put down shortly before his death - a book that somehow involves Griff, a Japanese solder & a desert island. The boy soon begins to suspect Grandfather Griff has his own agenda AND that he is determined to get the book. Evan & his Grandfather are locked in an age/dominance struggle as Evan tries to unravel his grandfather's motives.

Emperor of Any Place alternates between the present day California and & WWII on an almost deserted island with flash-backs that gradually illuminate the distant past. This book is a tour de force by any standard. It is a brilliant expose on generational struggles, on the post vs. pre Viet Nam view of war and on the fundamental precepts of civilized man. Read it and explore human psychology, history and the generational struggle. This book is a masterpiece!

As a young man, Author Ronald Dahl spent 2 years in East Africa representing Shell Oil Company, just before WWII. With the start of WWII, he joined the Royal Air Force (United Kingdom Air Force) and trained to be a pilot. This book covers his life from the voyage to Africa, until he completed his military service as a pilot and returned to England. It is brilliantly written and most interesting. A brief but wonderful read for boys of any age.

Reading history books, we hear a lot about what great pilots the Japanese had in WWII; but, we hear little about the quality or training of American Navy Flyers. This little book tells the experiences of George Winston as he went through U.S. Navy flight training. Light, enjoyable reading and yet gives great insight into the kind of training, the duration of training and how Mr. Winston felt about flying float planes, vs. dive bombers vs. fighters. Fun reading and very informative!

The Whiz Pop Chocolate Shop is equal parts whimsy & examination of deep moral issues. It's a gas to read despite exploration of consequences & loneliness. Too serious you ask? Above all, this is a book of hope & redemption.

The story begins as the Spoffard family inherits the long dead uncle's Magic Chocolate shop. The building stood unoccupied for 70 years, & yet, it is in such good condition that the Spoffards move in.

For nonstop fun, read this whimsical yet serious novel. It is the best I have read in 10 years.

Kiwi in Cat City by Vickie Johnstone- 4.5 Star Rating (9 to 75 years old) for boys & girls who like cats
Amy & James follow their cat Kiwi into the night, only to be invited to go with her to Cat City. Upon arrival, they find themselves transformed into kittens & along for the ride as Kiwi helps Inspector Furrball unravel the Cat Crime of the decade.

Kiwi in Cat City is fast paced & fun. Pace & utter disregard for reality result in a novel with the spontaneity of a good comic. Ridiculous but fun. Park your brain & go for the ride. You will love it!

Review by Athena: 5 Star Rating I recommend the book for any age (9 to ...... 108 years). This book has everything including good fun, action & humour.

The book is about 9 year old Amy & her younger brother who follow their cat Kiwi into the night to see what she does when they're asleep. The two kids get the shock of their lives when they end up in Cat City, where they are transformed into kittens. From there, Amy & James follow their cat around (instead of their cat following them) in a fast paced mystery & cat-crime adventure.

The author seems to have an unlimited imagination which makes the story enjoyable for all ages. I recommend that you read this book. I believe you will have a bucket full of enjoyment!

Kiwi in the Realm of Ra by Vickie Johnstone- 4.5 Star Rating (9 to 75 years old) for boys & girls who like cats

Kiwi in the Realm of Ra is yet another of Vickie Johnstone's wonderful adventures of Kiwi the cat and her human masters (Amy and James). In this episode, Kiwi and her human masters (James and Amy) are transported back in time and visit ancient Egypt. Together with animal friends from earlier books, they end up on the trail of Dev the criminal mastermind of the cat world. Ancient Pyramids, cat bandits and Ancient gods who are often not in sympathy with the cats are all intertwined in a book of mindless fun so typical of this author.

I have read and enjoyed all the Kiwi books. They are all good, but this one is outstanding!

Young Varjak's family is in danger when the Contessa dies & a strange man with his black cats take over the house. Moments before being murdered, Varjak's grandfather sends the young kitten Varjak to seek help in the outside world & to save his family. Will he succeed?

This is a gripping story for boys and girls alike. I can not give a higher recommendation.

This is a fabulous "coming of age" story & also a story of loyalty to family and friends. Sequel The Outlaw Varjak Paw is equally gripping. We only regret there are no more.

Young Alfonso Perplexon has the ability to do amazing things - but only when he is sleeping. He also discovers an amazing plant that must be returned to a lost city, deep in the Ural Mountains. His long lost uncle shows up, and soon Alfonso and the uncle are on a mission to save this lost civilization by returning the life giving tree. This story is the tale of his adventures in performing the mission & saving a lost civilization.

Chris Riddle creates a wonderful world that forms the "canvas" for this beautifully created series illustrated by Paul Stewart. When Riddle tires of one main character, he starts a new book with a different protagonist. All are interesting. The books are fast action & mostly fun. They are ideal boy's entertainment.

This is a very well written fast action story. B&W illustrations are provided throughout the book. Character growth is evident & characters often admit mistakes openly. Book 1 (Beyond the Deep Woods) creates the "canvas" for a world of fast adventure. Books 2 through 10+ are all excellent.

Each chapter presents an event from the weird & mythical life of adventurer Solomon Kane. The protagonist Solomon Kane is a religious zealot from the age of sword & pistol. A variety of stories ranging from action to horror are presented. All are excellent; however, character development is not an objective of the author. He is interested in depicting graphic action & horror. He does both very well.

Howard was an accomplished author in the 1920s and mid 1930s who died young. He was largely the creator of several "household" themes including the "Atlantis Saga". He was a brilliant writer, but not particularly interested in character development or complex relationships. This book can be quite graphic concerning violent events. I have therefore recommended it only for an older audience.

The Graveyard Book by Neil Gaiman 5 Star (Fiction)
I almost turned away from this book because of the first chapter; but, I'm really glad I read it.

On the heals of a brutal murder, a toddler climbs out of his crib, wanders out the door and into a nearby graveyard. As graveyard ghosts discuss keeping and protecting the boy, Silas the grounds keeper escorts the Murderer out of the graveyard.

What kind of life can a boy have living in a graveyard? Who is the mysterious grounds keeper Silas who acts as the boy's guardian? Who is the murderer and why does he maintain a persistent interest in the boy? Read this fascinating story and find out.

Music Credits: "Portugese Nostalgia" was obtained from www.jewelbeat.com for commercial use 2012.