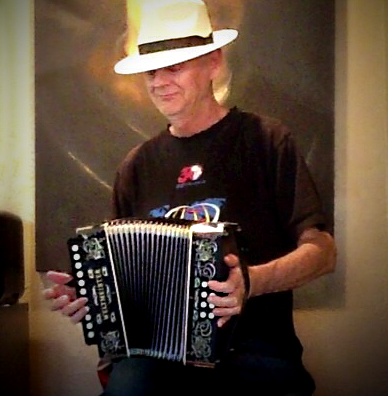 Accordions around the world - types & how they sound

The article 'Aren't Accordions Just for Grandpa' pointed out that accordions are unique among musical instruments. Unlike other portable instruments, they can handle the melody, chords & rhythm while leaving the musician free to sing. But, what do the various types sound like? Below, I have provided You-Tube links to excellent performers who use various types of accordions. Enjoy!

The accordion has treble keys played by the right hand & chords on the left. The chord buttons are interspersed with base notes convenient for playing the "um-pa-pa" sound often heard in European music (see the numerous You Tube tutorials). The combination of left hand chords & right hand melody produces a very complete music with a strong beat.

Each button of an Accordion plays two or more reads. The reads may be tuned an octave apart, thus producing a full, rich sound. When three or more reads are slaved to the same key, a pair of them are often tuned to to same pitch, but with one slightly higher. The effect is the "reedy" sound uniquely associated with accordions. When tuned in this fashion, an accordion is said to be "wet tuned". The particulars of "wet tuning" are a little different in France, Germany and the Balkans. More expensive accordions have 3 or more "registers". These are mechanical "slide switches" that select which reed banks are played. The musician can thus choose between "high pitched" music, a "wet tuned music" or the fullest sound produced by playing through all reed banks at once.

The Piano Keyed accordion is very popular, so I have tried to find different kinds of music, from all over the world. Enjoy!

The piano keyed accordion provides the musician's right hand with a keyboard of black & white keys much like a piano. Whether the bellows is expanded or compressed, a key always produces the same pitch. Keyboard inclusion of the full scale (naturals, sharps & flats) allows the musician to play almost any melody regardless of key.

The piano keyed accordion provides the musician's left hand with a bank of buttons. Each button produces either a chord, or an associated base note. Much folk music is played using the combination of C, G & F chords. Obligingly, the accordion is designed with the C, G & F chords grouped closely together with complementary base notes. While the "sea of buttons" looks daunting, the base notes are clustered in small islands of complementary chords.

As an amateur, back yard musician, I want an instrument with a variety of major & minor chords in the left hand & a reasonable octave range in the right hand which includes the piano "black keys". So provided, I am able to play both major & minor key songs that sound rich & full. Because I play "solo", a 40 base or 48 base accordion provides adequate versatility. I also find the light weight of a 40 base easy on my 50+ year old back. For my goals, a 40 to 48 base accordion is ideal. Were I young & trying to integrate with a musical group, the greater chord combinations of a larger instrument would be desirable.

Chromatic Button Accordions are played by many fine musicians. Some musicians believe the key arrangement to be superior to the Piano Keyed accordion but this seems to be a matter of personal preference. The instrument provides a complete scale (with all sharps & flats) arranged in a dense block of right hand keys (ordered on the diagonal).

The German Alpine Accordion is diatonic and equipped with "Helicon" base reeds - those make the "tuba" like sound (Tuba Like Sound: Helicon example). These kinds of instruments make some really cool music. Examples of music produced with Alpine Steirische Harmonikas follow:

The Diatonic Button Box Accordion (other than Alpine)

The diatonic (2 tone) button box is a lot of fun & ideal for "playing by ear". That said, it is a quirky instrument that lacks the versatility of the piano keyed accordion or the chromatic button accordion (both of which have the "black" piano keys). Nevertheless, In the hands of a master, this can be a lovely instrument.


A single button on a diatonic accordion plays two notes, depending on whether the bellows is compressed or stretched. In order to play a scale, the musician thus alternates between compressing and stretching the bellows. The button box has buttons for the left hand that play chords (different chords for stretch vs. compress of the bellows). The right hand is provided with one, two or three rows of buttons. Commonly, the first row of buttons plays in the key of C but without sharps or flats. The second row of buttons plays in the key of G but without sharps or flats. etc. Because each button handles 2 notes (or chords in the left hand), there are fewer buttons than on the piano keyed accordion & yet, a sufficient number of notes are available to play major keyed songs. Nevertheless, the musician finds himself forced to pull or push according to the note he desires and ingenuity is needed when the instrument "refuses" to play a particular melody.

While it sounds confusing, the diatonic (push/pull) arrangement of the button box is easy to learn, & produces pleasant sounding music. If the music is too high for a singler's voice, he/she simply moves his fingers to the other row of keys & plays in a lower key. The two frustrations are: 1) Absence of sharps & flats making minor keyed Russian, Jewish & Gypsy music difficult/impossible to play (the B/C tuned double row instrument should address this). 2) There are challenges to making the diatonic chord system work with a particular song. (on my Weltmeister, "Plasir D'amour" integrates easily into the diatonic system, but "Lord of the Dance" has alluded my best efforts. This is an inherent limitation of the diatonic system -- not of the Weltmeister ). To address the absence of half tones, Musicians sometimes play on both rows of keys, borrowing from here & there. While challenging, the musician is often able "coble together" some musical flexibility. (Click herehere for an example.

In conclusion, the Diatonic Button Box is light, convenient & affordable. It is ideal for the "back yard" musician or for those playing Irish or Country Western music. It works well with a waltz beat & it sounds good. It does not provide the ultimate in versatility. Many songs are easily played, while others are confounded by the somewhat eccentric "push-pull" nature of the diatonic system. Absence of piano keys renders minor keyed Russian, Gypsy or Jewish music impossible to play.

The most common concertina is 20 button instrument, with two rows of 5 for the right hand and likewise for the left. Some concertinas are diatonic (i.e. play a different note on the push vs. pull stroke). My personal instrument is a Hohner Anglo accordion, and thus plays a different tone when compressed vs. stretched. Learning to play the Anglo Concertina is surprisingly easy, & like any diatonic instrument it tends to produce pleasing sounds. The other two types of concertinas are 'English' and 'duet'. Each of the three has its strengths & weaknesses.

The English accordion plays the scale by alternating between left & right hand. Allegedly, this facilitates playing fast & lively tunes that would be difficult on a diatonic instrument. The disadvantage of the English keyed concertina is that simultaneous playing of melody & accompaniment is virtually impossible. The English accordion is thus reduced to playing the melody, without supporting base.

The Duet accordion, like the English plays the same note on bellows stretch & bellows compress (i.e. it is not diatonic). For the Duet, base notes are played with the left hand & treble with the right. The result is an instrument capable of playing simultaneous melody & accompaniment.

If you would like to buy an accordion or concertina & live in a major city, you doubtless have good local merchants with access to accordions. In addition the following web page identifies several merchants who can provide new or used instruments. I have personal experience only with Deftner and also Liberty Bellows (both good experiences). Links follow.