Statistics and the Probability Foundation: Chapter 1

The Birth of Statistics:
Probability math was begun when French gamblers approached a great French mathmetician a few hundred years ago. Gradually, Statistics grew out of Probability Theory to where we are today. Our first example will start, as Descartes did, with dice. We need that background; but, Chapter 2 will dive into Industrially Useful statistics which are based on concepts presented in this chapter.

Ch1 Example 1: The Throw of Two Dice
Two dice (named "A" and "B") are thrown from a gambler's hand. Let's determine the probability that the total number of spots on the dice is two. This implies that Die "A" shows one spot. And Die "B" also shows one spot. There is no other way that a 2 can result from a pair of dice.

During the solution of these problems, two general laws will be used. The laws are stated below and their truth will become obvious as you work through Ch1 Example 1.

The truth of General Laws 1 & 2 will become evident as we work through the 2 dice problem.

YOU there. Go fill in another row of the table you are copying into your notebook. We are going to need that table in a little while.

Now, determine the probability of throwing 11 with two dice:
Careful consideration shows this solution is exactly like the one above. We can get an 11 with either five and a six, or vice versa. The math and everything is just like "row 3" and the probability is 5.56%. So go fill in "Row 11" in the table you are making.

Now, determine the probability of throwing 4 with two dice:
There are three ways to get a 4 with 2 dice. They follow, along with the calculation of probability for each of the rows. For the final probability, it is the sum of the probabilities in the right hand column (because we don't care how we get a 4. We just want a 4 regardless).

CH 1 Homework 1:
Go work out the probabilities for each of the following. Add them to the table we are building"

The bottom of your table will be mirror images of the top. The finished table will look like Ch 2 Table 4 shown below. Check your answers. If you got them wrong, try again.

We just gained insight into how the number of ways an event can occur influences outcome probabilities. We also used General Laws 1 and 2 to compute probabilities for dice roles. While these are useful, statisticians have developed graphic pictures that help us visualize "the big picture". These are called Probability Density Functions (or PDF for short). These pictorial diagrams will prove very useful -- particularly so when we get to the very powerful Gaussian Probability Distribution. (I should clarify that a Probability Density Function can be in either graphic form, or can be written as an equation. We will be concentrating on the graphical form).

Our next task is to build (and discuss) a Probability Density Function (PDF) graph based on Ch 1 Table 4 above. I built this PDF with graph paper and a ruller. A simple PDF like this one is not a mysterious computer creation -- you can easily do it by hand using Table 4 above as I did. 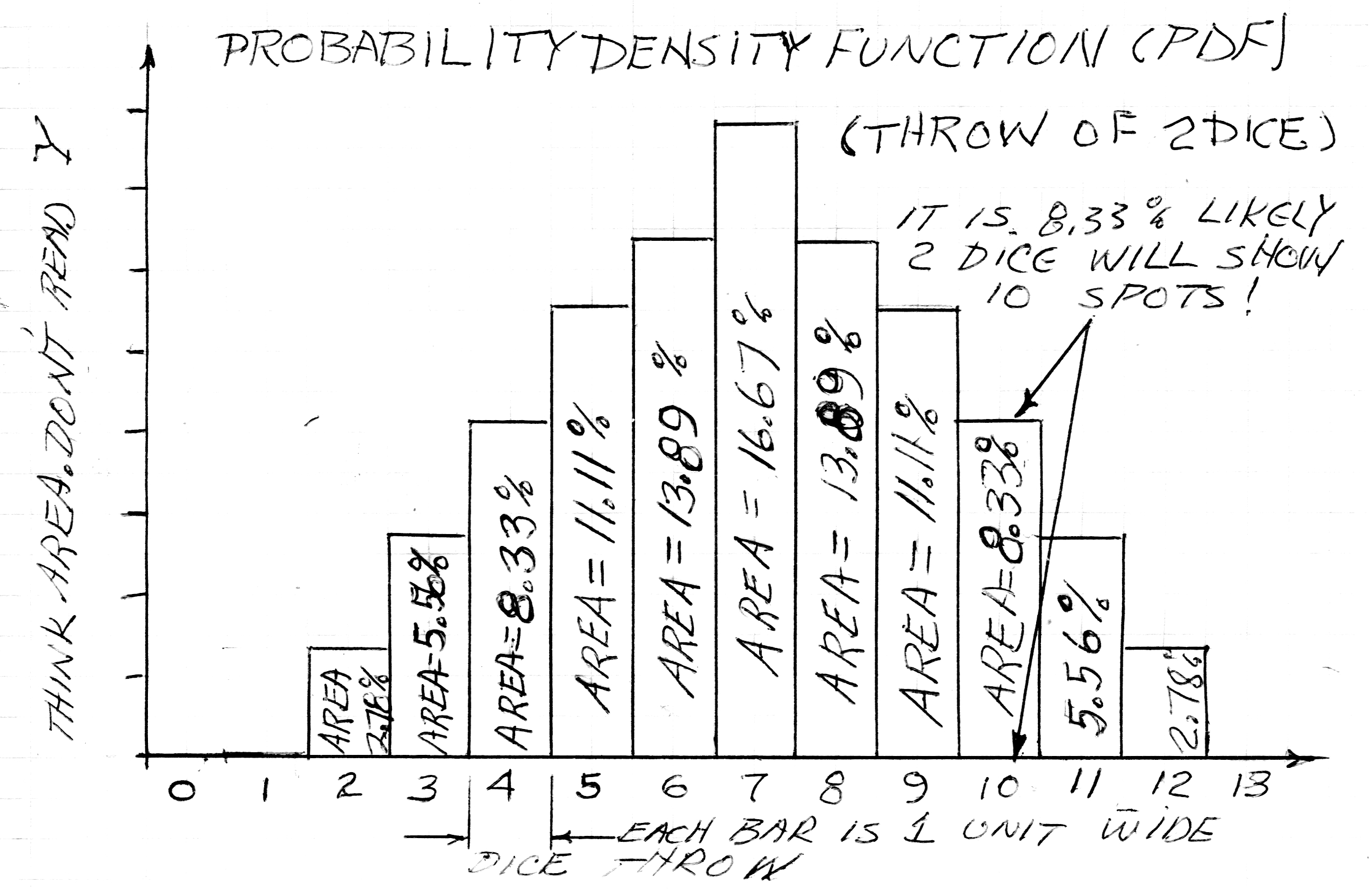 Observations about the PDF for 2 dice:

In Chapter 2, we will examine PDF fuctions for several Industrially useful Probability Distributions. We will talk about the kinds of problems where those distributions are useful. Finally, we will also discuss what we can learn from the shape of the PDF.