ARTICLE UNDER REVIEW: Through generous consideration of others, I have received data concerning magazine expenditures of Japanese Battleships at Tsushima. This should enable more accurate determination of the number of large calibre hits required to sink a Russian Pre dreadnought at Tsushima (likely 35 to 40 hits rather than roughly 60 hits indicated below). Some adjustment to estimated percent hits by both sides is additionally possible. This will require some thought, as Russian ships during the August 10, 1904 sea battle received similar numbers of hits but remained reasonably functional. Updates should be accomplished by TBD date.

Summary: The Russo Japanese war was the debut of modern sea warfare in the age of steam and high powered guns. The following article presents a brief overview of the war for context followed by summary level conclusions from newly conducted research that establishes gunnery percent hits at 6500 yards and 8800 yard ranges during major sea battles. Summary conclusions on the number of 12" hits required to sink a "then modern" 13500 ton battleship are also provided.

Introduction: The early 20th century was a period of rapid development of naval gunnery. In 1898, the U.S. Navy achieved 2% hits against the Spanish fleet in Cuba at 2000 yards range. Only six years later, the Japanese Navy sank seven Russian battleships with a devastating 20% hits delivered at 6500 yards range.The Russo Japanese war is thus a major historical milestone in the development of naval gunnery. This brief report summaries the war, the equipment and the gunfire accuracy (i.e. percent hits). A companion article provides the technical analysis that supports these conclusions.

Request the Full Technical Report (free): Interested parties are encouraged to send me an e-mail requesting the full, 12 page technical report justifying the conclusions provided herein. The report includes all the math, referenced sources and explanations of how the analysis was performed. Send your request to paul-watson@sbcglobal.net and request "Analysis of Russo-Japanese War Naval Battle Gun Hit Percentage" by Paul F. Watson. If you produce a product, I do ask that you identify the website: www.dionysus.biz, the report name and author in an appropriate credits section.

The Ships & Guns: The 1904 Russo Japanese War was fought with armoured, steam powered pre-dreadnought battleships. A typical battleship of 1904 was equipped with two twin 12 inch gunned turrets mounted fore and aft. A secondary armament of 12 broadside guns (6 each side) was also typical. 3" anti torpedo-boat guns were standard equipment. The 12 inch guns fired 850 pound projectiles at 2500 feet a second with battle ranges in 1904 varying from 3000 to 10000 yards. A typical battleship of the period is shown above (note: The battleship shown above had two small 6" gun turrets (each side) mounted on the weather deck in lieu of "broadside" mounted guns. This was a common feature among French Influence battleships of the period).

The Sea Coast Fortress of Port Arthur Manchuria: Referring to the map above, small semi-circles illustrate positions of mountain fortresses, 9" and 11" seacoast mortars and five 10" high power guns. The West Port and Harbour area are protected anchorages. The fortifications at Port Arthur were robust. It was ringed with concrete and earth forts having overlapping fields of fire, cannon and machine guns. On the sea side, Port Arthur had 5 10" parapet mounted guns on Golden Hill. Also facing the sea were approximately 20 seacoast mortars capable ranging to about 10,000 yards with high angle fire. The sea outside Port Arthur was mined with a narrow passage for ships to pass. The Port Arthur fortress was probably the most powerful and best protected fortress of the 20th century.

Russian 1st Pacific Squadron- Battleships at outset of War
Table 1
Note [1] Petropavlovsk struck a mine and exploded on 13 April 1904. The irreplaceable Admiral Makarov and crew were lost. Petropavlovsk was destroyed prior to the main sea battles.

Japan had awakened from self imposed world isolation about 1870, only to discover Western Powers colonial aspirations in Asia. Japan was understandably desirous to block Russian expansion into southern Asia.

At the beginning of the Russo Japanese War, the Japanese navy consisted of six first class, British built battleships, each mounting four 12 inch guns (total) in fore and aft turrets. Powered by coal fired steam engines, the fleet maximum speed was 18 kts. In addition, the Japanese had a large number of armoured cruisers, some of which had 4 8 inch guns (fore and aft twin turrets) and others had 2 8 inch guns mounted in single turrets (fore and aft). Like Russia, Japan had a large number of unarmored, fast cruisers mounting 6 inch guns.

Beginning of Hostilities: The Russo Japanese War began with a surprise attack by torpedo-boats on the Russian battleship fleet anchored off Port Arthur. Tsesarevich and Retvisan were struck by torpedoes and damaged the night of 8 February 2004. The surprise attack was not unlike that on Pearl Harbour 35 years later; but, in 1904 it was applauded by the American press and people.

Naval Skirmishes and Loss of 3 Battleships to mines: In the weeks that followed, numerous bombardments and minor skirmishes occurred between the two fleets. The Russians were under the command of the brilliant and aggressive Admiral Makarov, but Russia was deprived of his irreplaceable leadership when flagship Petropavlovsk struck a mine on 13 April 2004, and blew up with the loss of all hands.

Only a month later, Russian mine layer Amur planted mines in the route often patrolled by the Japanese fleet. On 14 May 2004, two Japanese battleships struck mines. Hatsuse blew up with the loss of crew. Shikishima sank a few hours later.

Battle of the Yellow Sea (10 August 2004): The Russians were painfully aware that Port Arthur was under assault from 150 thousand Japanese solders who were gradually tunnelling under and destroying the Russian fortifications. It was only a matter of time before the fortress surrendered to the Japanese.
The Russian command made the unavoidable decision that the fleet must run the Japanese blockade and escape to Vladivostok. On 10 August 2004, the six remaining Russian battleships met 4 Japanese battleships and numerous armoured cruisers 20 miles from Port Arthur. The resulting battle was mostly fought at long range (8800 yards). For 1904, anything beyond 3500 yards was considered "very long range", and as a result, the battle was tactically inconclusive; yet achieved Japan's strategic goal of driving the Russian fleet back into their doomed sea coast fortress.

The Russian battleships concentrated their fire on the Japanese flagship Mikasa, which received most of the Japanese damage. It is known that Mikasa received 35 hits, but the number of 6 vs. 10 and 12 inch is not published data in the United States. A careful analysis based on period technical approaches was performed (you may request the companion technical analysis if interested) and the probable number of hits follows:

Destruction of the Russian 1st Pacific Squadron: On 30 November 2004, the Japanese Army captured 203 meter hill which provided a view of the inner harbour and Russian battleships. Bombardment with 11 inch Japanese howitzers soon followed. Russian battleships were struck numerous times, thus destroying the Russian 1st Pacific Squadron. The great sea fortress at Port Arthur surrendered to the Japanese army on 1 January 1905. Below, is an image of the Russian fleet, sunk in the harbour area. 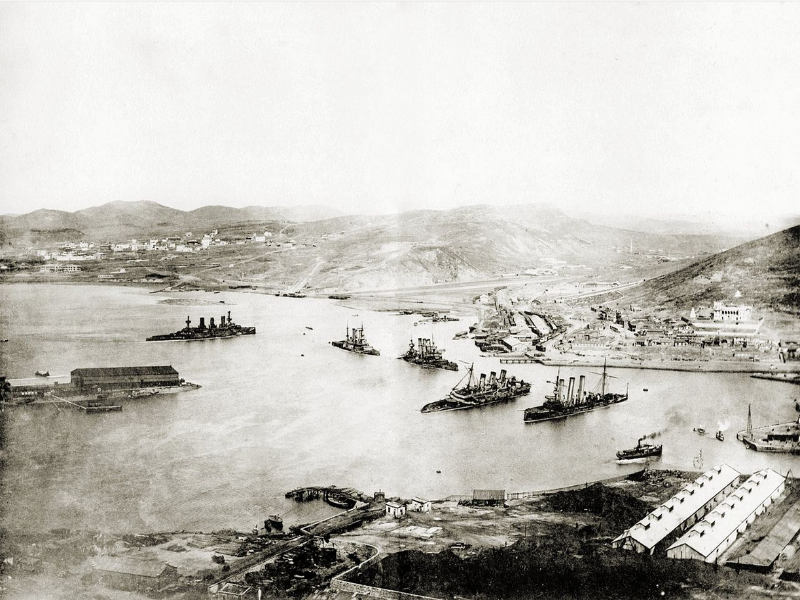 The 2nd Pacific Fleet: Recognising the dire condition of the fleet. Russia sent a relief squadron of battleships from the Baltic, around Africa and finally to the Japan Sea. While these were in transit, the Russian 1st Pacific Squadron was destroyed and Port Arthur fell to the Japanese.

The Battle of Tsushima: With news that Port Arthur had fallen to the Japanese, Russian Admiral Rhodesvenski, commander of the relief squadron set his course for Vladivostok; but was met by Japanese battleships in the straights near Tsushima Island. The Battle of Tsushima ensued and 7 Russian battleships were sunk, with the remainder captured. Table 5 below outlines the fate of the Russian fleet.

Gunfire Accuracy of Russian and Japanese Fleets: Analysis based on firing rates, danger intervals, magazine capacity, ammunition expenditures and known hit counts enabled a determination of the likely hit percentages during these two great sea battles. I believe the analysis is convincing. You are invited to request the full technical analysis report by e-mail. The results are presented in the table below.

Note: 2.2% hits by old Russian Battleships is highly speculative, as insufficient data has been located to provide a firm technical basis for this estimate.

Gunfire Damage and Resultant Condition of a Pre-dreadnought Battleship: The 10 August 1904 sea battle demonstrated that a modern pre-dreadnought battleship of the period could survive 20 12 inch hits and yet retain sea keeping and fighting capability. After such bombardment, neither buoyancy nor stability were compromised. The main performance degradation issues were speed and fuel consumption. The smokestacks were riddled. After the battle, Tsaravitch was reduced to 4 kts speed and fuel economy prevented steaming to Vladivostok. These observations are supported by damage to six Russian and one Japanese battleship during the 10 August 1904 battle. Also, we may conclude that using 1904 technology, a sea battle at 8800 yards did not result in sufficient damage to sink a near equal adversary. Magazine capacity of 80 rounds per gun for Japanese and 60 to 70 rounds per gun for the Russians could not produce sufficient damage prior to exhaustion of ammunition.

The Tsushima battle was fought at 6500 yards and did sink ships, thus provides evidence of the number of hits required. The following bullets summarise the crucial observations.

Notes: Musical Credits: Piano Etude is in the public domain