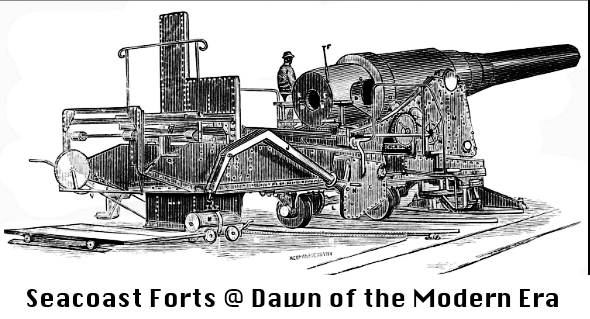 Seacoast Forts at Dawn of the Modern Era

It is perhaps surprising that the "Modern Era" arguably began in 1890. This is true both militarily and in civilian life. Considering the military first, the French invented smokeless (gun cotton based) gun-powder in 1884 and it was fully integrated into their navy by 1893. The Swiss invented a similar "flashless" powder in 1888, and Alfred Nobel invented Nitroglycerine based Ballistite gun powder in 1887 (1)(10). The integration of smokeless powder and the breach loading rifled cannon resulted in a fully modern weapon capable of hurling explosive shells ten miles. The machine gun had already been invented, and barb wire was widely used on battlefields. Steam powered steel battleships 400 feet long cruised the seas armed with two, twin 12" gunned turrets, and many smaller guns. While technologically advanced fire control methods had yet to be developed, armament was in all senses modern. U.S. Forts of the 1890s were equipped with telephone communication and electric search lights. In the Far East, the Russian fortress at Port Arthur was protected by five modern 10" cannon installed at "the electric cliffs" -- an apparent reference to the generating station associated with the battery.(6)

Back in the American homeland, Thomas Edison had already invented the light bulb, and the 1908 Presidential Debates were recorded and distributed on primitive record players (11). Cities were being wired for electricity and steel bridges crossed mighty rivers as women fought for the right to vote. The Zipper was patented in 1893 and soon began "holding things together as needed." While technology had not yet revolutionized transportation, the modern era had arrived.

Some might wonder why we rarely hear of great seacoast forts of the modern era. Some criticize the coastal forts as ineffectual while others wonder whether they even existed. They truly did exist and to a great extent we have heard little of them because they were very effective. Put simply, few battle fleets had the audacity or power to challenge the coastal guns. In modern era, when great fortresses fell, it was was to an invading army rather than to a powerful fleet.

Effectiveness of Shore Batteries vs. Naval Guns: In the period before 1905, one 12 inch coastal gun was thought as effective as 3 ship board guns of the same size. There were four primary reasons for the superiority of shore batteries over ship-board guns.

In conclusion, a coastal fort saw its target, hit more often and was invulnerable to damage. The primary advantage of a fleet was the ability to move down the coast and attack an unfortified position. But when the purpose of the coastal fort was defense of a naval anchorage, even that advantage for the fleet was lost. 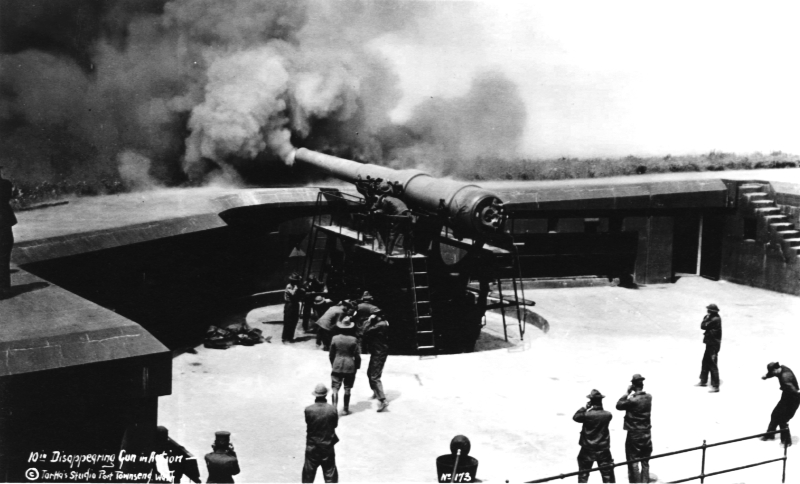 Did Modern Coastal Forts Really Exist? There were many coastal forts in the U.S., Europe and Asia. A few examples follow.

The above list is not exhaustive, and merely provides a few examples. Other nations also had robust defenses. It may be concluded coastal forts in the modern period (1890 and on) were quite common around the world. In restricted European locations, coastal guns were installed in Iron and steel turrets and casemates. In the U.S. where space was available, coastal guns were installed in earthwork and concrete fortifications. Likewise for the far east Russian seacoast fortresses. Between 1890 and 1920, American coastal forts usually had gun carriages that allowed the gun to swing up from behind a wall for firing, and drop down behind the wall for loading (disappearing mounts). Before the advent of military aircraft, these forts were virtually invulnerable to cannon fire from ships. There were exceptions to American practice. At Corigador Island, the U.S. Army Corps of Engineers turned a small Manilla Bay island into a "concrete battleship" with two twin 14 inch gun turrets.(5)

In the modern period (1890 and on), coastal forts were common throughout the world. We read little of these great guns because they were rarely challenged. There are few discussions of battles between coastal guns and battle fleets because the coastal forts were powerful and admirals were smart. The few recorded duels between coastal guns and fleets (e.g. Japanese fleet bombardment of Port Arthur) end when fleets retired after coastal guns began hitting. News grabbing headlines were thus about armies over-running fortresses rather than battle fleets destroying the big coastal guns.