Introduction: When a WWII dive bomber aimed at a target, how far away did the bomb typically fall? Is it possible to determine the average 'radial miss' distance from the percent hits during WWII ship attacks? The article below is a bit technical, but works out an example showing exactly how this kind of historical research can be done. The resulting conclusions extend our understanding of history and facilitate development of computer based historical simulation games.

A Gaussian statistical analysis can often be assumed (if we have no better information) to describe diverse phenomina. In the following article, a historian uses this approach to analyze the accuracy of WWII bombs because he wants to unify his understanding of land vs. sea attacks. He wishes to develop technically based comparisons of attack accuracy for U.S., German, Japanese and British planes. This article demonstrates that percent hits against ships can be 'leveraged' into average miss distance during dive bomber attacks and shows you how to perform such an analysis.

The Problem: The historian has information on the percentage of hits achieved on ships during dive bomber attacks. He also knows how wide the ships were. Because the ships were much longer than wide, he assumes most of the misses occured when bombs fell off to the sides of the ship under attack.

He would like to determine the average "miss distance" in feet for U.S. Navy dive bombers and the exact same method will work to better understand Japanese wartime achievements. 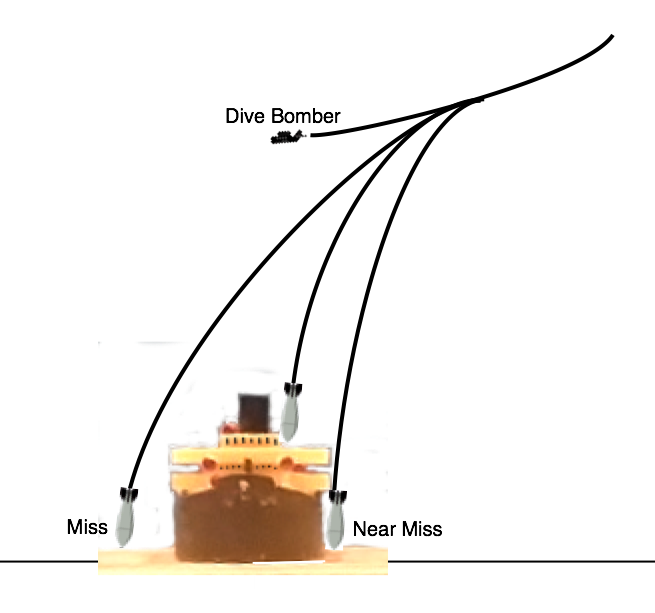 What he knows from history: The researcher has already determined that U.S. dive bomber pilots hit enemy ships with about 16% of their bombs. He also knows that the typical target was about 63 feet wide (beam of the ship). Some ships were wider and some more narrow; but, 63 feet is a good approximation.

Analysis Approach:
The following chain of reasoning are 'echos' of the historian's thoughts : 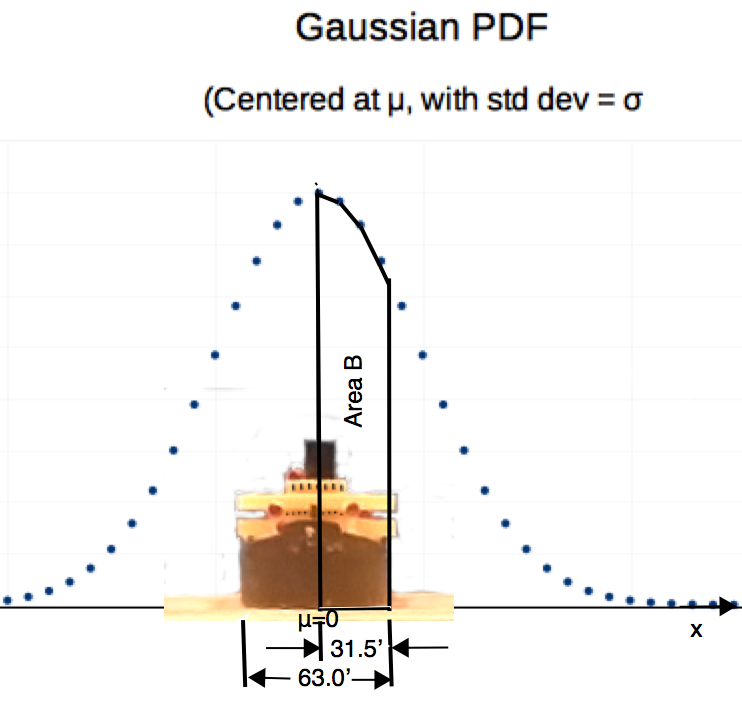 Note: 'Miss' has two meanings in this article. Usually, 'miss' refers to whether or not a bomb actually hit a ship. But 'miss distance' generally refers to the distance away from exact center of aim, that the bomb fell. In the material that follows, we are generally discussing the the second meaning. To emphasize the difference, a ship is about 63 feet wide. A bomb with a 'miss distance' of 20 or 30 feet would actually hit the ship.

If 25% of the bombs fell a certain distance to the right of center in Figure 2. And 25% fell the same distance to the left, then that distance right/or left should capture 50% of bombs dropped. So, here I go:" The historian has now found a number that makes sense to all of us. For attacks by U.S. divebombers, 50% of the bombs will hit within a 109 foot radius of the aiming point. This is slightly different from the 'average miss distance' but will be close. He can compare 109 feet to the average miss of British, Germans, Japanese and whoever else. With a little bit more effort, the historian can compute the average miss distance, and the method is described below.

The historian started with a mess of information, but through statistics, the he was able to make sense out of the data.

Conclusion: Approach to Problem Solving
At this point, the reader may be bewildered. Often, with statistics problems, you have to sketch some pictures (like Figures 1 and 2), erase the sketches and start over. The sketches are the key to understanding the problem. Next, you mess around with the famous Z equation and try to understand how it fits in with your sketches. Then, you will try to work the problem. You may have to go 'back and forth' between the Z equation and your sketches several times before you have your final answer. That is what the historian did in the example above.

If you believe the Gaussian reasonably represents the phenomina and you have μ and σ , you can probably compute whatever you want to know.

Future Work: We have an answer we can compare to average miss distance, but it is not exactly the same. We have a model that seems reasonable for bomb targeting errors of U.S. dive bombers. We assume bomb targeting errors are Gaussian, centered on the middle of the target with average μ = 0 with a standard deviation σ = 155 feet.

I hope this example shows you how to 'wallow' through a problem, dancing back and forth between pictures and equations until you can grind out a meaningful answer.

Optional Student Exercises:
1. Data from the 1905 Russo Japanese War shows that an underwater explosion within five feet of a ship damages a ship (i.e. it is a damaging near miss). Using data for U.S. Navy dive bombers above, what percentage of bombs dropped will be 'near misses'?

2. Japanese dive bombers from 1940 through 1942 got 18.2% hits when they attacked enemy ships. What is the Standard Deviation for the Japanese Dive Bombers? What is miss radius that captures 50% of the bomb drops? Were the Japanese pilots better or worse than the U.S. pilots, or were they about the same?